Getting ready to remove the Conservatives from power 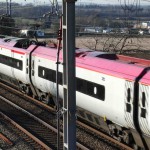 THE Department for Transport (DfT) has stated that the West Coast Main Line (WCML) is now twice as busy as when it was last upgraded. That upgrade caused 10 years of disruption for commuters from Northampton to London.

Some people who object to High Speed 2, the proposed new high speed rail link to Birmingham and Manchester, want another upgrade to WCML instead – the so-called Rail Package 2 (RP2). RP2 provides far less new capacity than HS2.  It also increases capacity at off-peak times when it’s not needed.
RP2, incorporates the cost of upgrading the existing line to allow more trains with extra carriages. The DfT has stated that RP2 is not a viable alternative to a new high-speed rail network.

It would also cost almost £9 billion. Jill Hope says that RP2 could not possibly be seen as value for money, and a that another 10 years of WCML disruption is just not acceptable. HS2 is the only chance of Northampton trains getting a proper opportunity to access the fast tracks, and is essential for the prosperity of the town. That probably holds true for the other main commuter towns down the line such as Milton Keynes, Bletchley and Leighton Buzzard.

Leave a Reply to Elephant_never_forgets