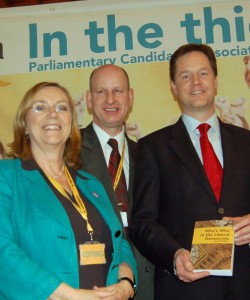 Liberal Democrats walk with wolves, know a thing or two about hyenas and sometimes hunt in packs but these revelations in the new seventh edition of Who’s Who in the Liberal Democrats? have nothing to do with life in the Coalition.

The first is the spare-time activities of one of the party’s trainers, the hyena expert is one of our MEPs and the third entry refers to an extraordinary contemporary dynasty that fielded no fewer than five candidates in last year’s general election.

The new reference book produced by the party’s Parliamentary Candidates Association also claims that journalist MP Bob Russell (Colchester) is the fastest typist in the Commons.

Sadly, Lord Bonkers is no longer with us, his entry having been omitted on legal advice.

Read more about how to get your copy here.

“A definitive guide to the movers, shakers and leaders in the UK’s Liberal Democrats. A must for party activists, journalists, lobbyists and political commentators.”