Tories say they will open up Abington Street to traffic.

THE TORY GROUP on the Borough Council have announced that they want to open up Abington Street to traffic once again.

They are proposing opening up the “middle section” of Abington Street as key part of their manifesto for the May local elections. If elected they say they will carry out the work within four years.

This will allow traffic to enter the street from St Giles Terrace and then exit up Wellington Street by the side of Marks and Spencer.

Jill Hope said: “This is a crazy idea. It completely contradicts the results of a very recent consultation by the LibDem controlled Borough Council.

“The survey was concerned with the recent central area action plan.

“70% of those responding said pedestrians should be given more priority in the central area of town.

“50% didn’t want the re-introduction of buses along Abington Street either.

“In any event, it is a matter for the County Council Highways Department.

“The Borough Council Tories are completely out of touch. They don’t even know which department is responsible! 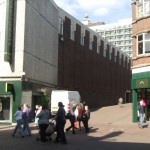 “The entrance to Wellington Street is extremely narrow for buses to negotiate. The local Tories haven’t given a thought to that. The pavements on that street were always very narrow – it will be extremely dangerous for people walking up there to have large buses so close to them.

“Nor have they given any thought to the owners of the cafés and restaurants which have developed and created a pleasant atmosphere in this area.

“This stretch of town is very busy at weekends. Do the Tories ever bother to visit the town centre?”

“I also can’t help wondering if the Tories have noticed that the statue raised in tribute to Francis Crick is slap bang in the middle of their proposed road?!”