When is it OK to scream and swear at a 14 year old?

APPARENTLY, according to protesters in Sheffield, when they are heading into Liberal Democrat conference. 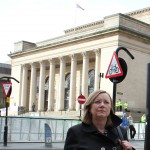 Alex White, the star of last week’s Scottish Conference, was attending her first Federal Conference at City Hall in Sheffield.

She’s had to endure what she called “vile abuse” as she’s gone back and forth from the Hall.

She said people were screaming and swearing at her.

It’s fine to make your point, protesters, but there are limits.

I’ve heard from other friends there that peopleare being spat at and called names……..read more here