WRITING in The Guardian, Jim Steer, director of Greengauge 21, a non-profit making organisation researching high-speed rail says: “HS2 is the most efficient way to tackle a fully foreseeable problem – transport capacity is running out”. 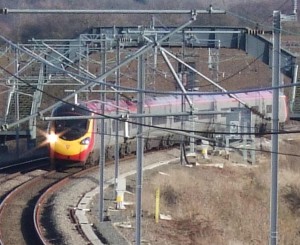 “It is better to build from scratch rather than again attempt a disruptive line-of-route-upgrade”.

Jill Hope agrees and says: “We certainly don’t want another prolonged and disruptive upgrade to the line from Northampton to London”.

“Commuters to Euston from Northampton would have every right to howl if that were to happen.”

The West Coast Main Line (WCML) through this part of the county is expected to reach capacity by 2020. This will be five years before HS2 is in place, at least as far as Birmingham, to ease congestion on the WCML.

Earlier this month the Office of the Rail Regulator (ORR) said it would allow a 10-year track access contract for the new WCML franchise, allowing more flexible track access rights than currently. The ORR has approved London Midland’s additional services between London Euston and Northampton.

Jill Hope said: “This is good news for commuters to Euston, and hopefully Birmingham as well.” It is hoped that the new franchise will operate from April next year, with a revised timetable in place for implementation in stages from December 2013.