Getting ready to remove the Conservatives from power

How I would solve the problems with the buses

PEOPLE in Northampton are  always moaning about local buses. They frequently blame “The Council”. 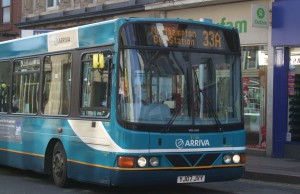 I’m only going to say this once…..the council no longer runs the bus service. When it’s bad it’s not the council’s fault.

Mrs Thatcher privatised the council’s buses. They were sold off for much less than they were worth, creating several new millionaires. The idea was that they would be better, more competitive, more efficient.

The flaw is that many bus routes lose money…not enough passengers, long routes, high fuel costs. (Even more so since this article was first published back in September.)

When the council ran the service it accepted there was a social need so profitable routes subsidised loss-making routes.

Now what happens on loss-making routes is that the bus company threaten to cut the route without a subsidy from the council. On top of that add the issue of free travel for pensioners. Claims are now submitted for the cost of this free travel to the council, not all of which is refunded by the Government who made this policy.

It’s too late to go back. But how about this: a bus service, perhaps run by the council, but completely free! It would transform our carbon dioxide footprint at a stroke.

If Thatcher had done that all those years ago, we’d have fewer millionaires but far fewer children with asthma.

I know which I’d prefer.

This is a short extract from the full article, which appeared in the Northampton Chronicle & Echo of 2 September 2010.