A Message from Charles Kennedy

OVER recent days No2AV have published a series of ads in local papers that can be described as distasteful at best, shocking and outrageous at worst.

The premise behind the ads is that the country can’t afford the alternative voting system. That by saying Yes to AV, voters will be taking £250 million away from sick babies in need of care, or soldiers in need of armour.

I say this kind of behaviour shows exactly why the UK can’t afford to say no to AV.

It’s clear that the No campaign don’t have the integrity to regulate themselves, but this is our once-in-a-lifetime opportunity to change politics in the UK. We mustn’t let the country get distracted by the No campaign’s cheap tricks.

Yes to Fairer Votes are calling on the Advertising Standards Authority to issue guidance on this campaign – and fast. Please add your name today. 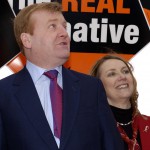 The No campaign are building their arguments on scaremongering. They are doing a massive disservice to the voters of the UK. This is a serious subject and we need them to engage in honest, open debate.

This debate must centre on the future of politics in the UK, re-engaging voters and giving a voice to people, this is too important to be sidelined by petty backbiting and cynical campaigning.

UK voters are entitled to decent, honest and truthful advertising campaigns – these adverts fail on every count. Join us in calling for the ASA to step in today, so that we can get on with the debate the country deserves.

We can’t waste this opportunity.

The Independent report on the cost of AV:  Voting reform will not cause more cuts Treasury insists.