Cycling on the pavement: NOT acceptable and needs to be ENFORCED

AT THE JULY MEETING OF THE ST JAMES RESIDENTS’ ASSOCIATION the subject of cycling on the pavement, particularly in Weedon Road, was raised yet again. 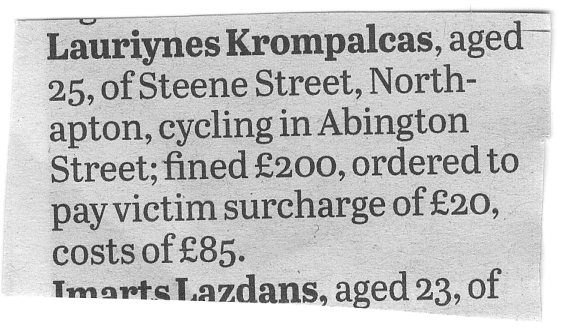 Two local residents, who have actually been knocked down by cyclists, raised their concerns.  I am also aware of several other residents who have either been hurt or have been the subject of near misses, including my husband!

One of the people reporting the problem also reported that his young son had been knocked down as well. A hairdresser on Weedon Road has reported that some of her older customers have been seriously frightened by cyclists as they leave her premises.

In the week of 28 July I was on Wellingborough Road in Northampton first thing in the morning.  I was delighted to see three Police Community Support Officers on both sides of the road flagging down cyclists on the pavement and talking to them.

I don’t know if any of the people they stopped were charged or fined, but I think that they will probably stop cycling on the pavement in that area on future. The thing that surprised me was the fact that the PCSOs were visible a long way away, but the cyclists on the pavement didn’t hesitate or get off their bikes, they simply carried on riding and clearly didn’t expect to be challenged!

I hope this is the start of a concerted exercise by the police to deal with this issue – when will we see them on Weedon Road? It’s time to take a stand here. Cycling on the pavement is illegal for good reason.

Some cyclists are careful and courteous, but many of the people cycling to and from work on the pavement in Weedon Road cycle at high speeds and care nothing about the injuries they might inflict on pedestrians. The local PCSO has promised to see what can be done.

I believe that we should all act by challenging cyclists and asking them to move onto the road. If a lot of people do this, eventually the cyclists will get the message that cycling on the pavement in Weedon Road is not acceptable. Please help, and please report all incidents of injury or near misses to the police on 101.