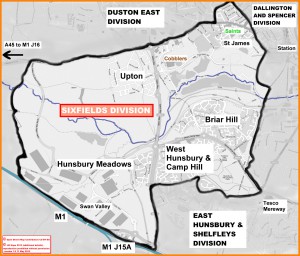 The new Sixfields Division for county council election – what a mess!

IT’S as if Sixfields is made up from the bits left over from everywhere else!

THE Lib Dems put forward different proposals to the Boundary Commission. We tried to keep St James as a single area, but it’s been split in three, with part going into Duston East, part going into Dallington and Spencer and part going into Sixfields. Lib Dem suggestions were ignored in favour of the Tory’s proposal. What a mess!

BASED on telephone canvassing, hardly anyone knows who their Conservative county councillor is anyway – these changes are going to make that even worse.

WHEN you have a Lib Dem councillor, you will hear from him or her regularly telling you who they are, what they’re doing on your behalf and how to get hold of them if you have any concerns. Regular contact means every couple of months all the time, not just when there’s an election on. This is the very least you should expect from your elected representative.