Let’s have just ONE Council for Northampton!

AS PART OF the Liberal Democrats campaign for a second term at The Guildhall we want one council running town services.

These are currently being run by two councils – the Borough Council and County Council – Ridiculous!

This means much duplication of administration and other resources and wastes money. 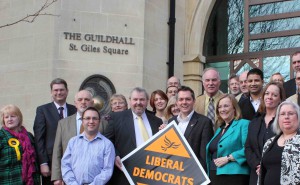 But there is another good reason.

The people of Northampton want the services in Northampton to be provided and run by Councillors who live locally.

They do not want their council services to be decided on, and run by, a group of councillors from opposite ends of the county.

There is clearly a contrast between how efficiently the Liberal Democrats have run the Borough Council with no cuts to front line services.

Compare that with the ineffective Conservative County Council.  It is cutting street lighting, safety cameras, school crossing patrols, bus services, and in the past care homes and day care centres.

Northampton is at a crossroads. Let’s keep Northampton Moving Forward by giving the Liberal Democrats a second term in Northampton – and give us the chance to take over the County Council’s services in Northampton.