The only question on May 5th

THE LIB DEMS won control of the Council for the first time in May 2007. 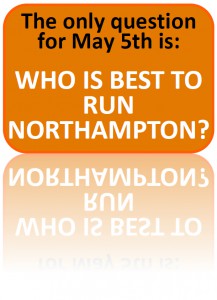 Before 2007, the Council was run by a minority Conservative administration.

For 12 years before that by Labour.

The Conservatives left the Council in administrative and financial chaos. It had been rated poor by the Audit Commission in successive reports in 2004 under Labour and 2007 under the Conservatives.

The Labour local government minister had described it as one of the worst performing councils in the country and in the ‘last chance saloon’ before government intervention.

Before the Lib Dems swept to power in 2007, the poor performance of the Council’s planning service led to it being stripped of development control powers over major planning applications.

These were  transfered to the unelected West Northamptonshire Development Corporation.

Before 2007 the Council was criticised for its failure to look after vulnerable people.

Before 2007 housing benefits claimants had to wait months for claims to be processed.

Before 2007 disabled people were unable to even get on a waiting list for grants for adaptations to their homes. Vacant council homes were left empty for months and months.

The Conservative-led Borough Council was also criticised for poor political leadership, its failure to set priorities and take difficult decisions.

Now read here how the Liberal Democrats turned the council round.