TALK ABOUT  adding insult to injury. 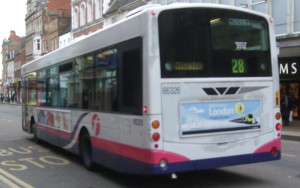 The unkindest cut of all

The Conservative County Council have cut lollipop ladies and gentlemen; they have cut grants to many voluntary groups, they have cut 900 jobs, but the unkindest cut of all is probably one of the smallest.

Companion travellers who accompany people who are entitled to a free bus pass have found out that this privilege is to be dropped from 1 April.

Some of the people who have taken advantage of this scheme in the past are parents accompanying autistic children to school.

Some of these parents won’t be able to afford to pay their fares, and as their children are incapable of travelling alone, they will have to be taken out of school and be home schooled.

This comes on top of the very real threat to the No 28 bus in West Hunsbury.

Who knows – the loss of the travel concession may happen after the bus is withdrawn anyway.

The saving from this mean-spirited cut to services must be tiny, but the misery caused to  many parents or companions of people struggling with disabilities is unacceptable.

Couldn’t they have cut some other items at County Hall instead? Biscuits? Photocopying?