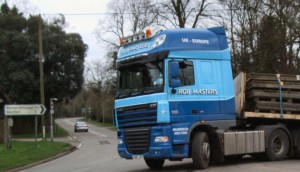 This is pouring increasing numbers of  HGVs onto the Towcester road in Milton, Hunsbury and Blisworth.

This breach of planning conditions has been going on since April 2009 but Conservative-run South Northants Council (SNC) has so far failed to take decisive action.

This is in spite of SNC acknowledging that: ‘this does not comply with the permitted use, and a material change in use has occurred which is a breach of planning control’.

There are currently 100 trailers currently on the site, which has the capacity to store as many as 400 trailers. HGV traffic exits at the junction of Gayton Road and Towcester Road. This is on a sharp bend of a road with a significant accident history. At this junction four roads join on a blind bend.

With only 100 trailers on the site there are already excessive HGVs on Towcester Road in Milton Malsor, imagine four times this number or more.

Jill Hope asks a simple question: “Why was the A43 Blisworth and Milton by pass opened in 1991?

“To divert this traffic away from the residential developments in Hunsbury, Blisworth and Milton!

“It’s continued for far too long. It is a ridiculous situation.

“We now have HGVs coming from this site and potentially two other sites in future – the old Sewage Works in Blisworth and the proposed sand quarry between Milton and Collingtree.

“Conservatives run both South Northants Council and Northamptonshire County Council – they MUST ACT TO CONTROL HGV TRAFFIC AND KEEP IT AWAY FROM residential roads”.

According to a recent police traffic survey in Towcester Road there are  6,062 vehicle movements a day. That’s more than two million each year, on a road with a notorious accident record.

In the last 25 years, there have been eight fatalities Milton and Blisworth, and numerous other accidents.

HGV operations should only be permitted to operate on sites close to, and with direct access to dual carriageways and motorways such as Grange Park, Eden Park, Pineham and Swan Valley.

The current operation is contrary to SNC’s own planning policies on commercial development in rural areas.
Leave a comment