Lib Dem Conference – “We’ve put down the placards and taken up the reins of power.” 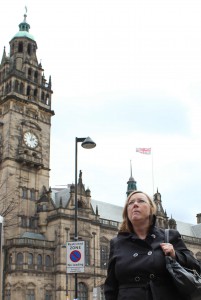 There were 6-foot steel barriers all round the City Hall where the main debates were taking place, and hundreds of police officers.

We had to pass through metal detectors and body searches to get in.

Outside, the crowds of demonstrators promised just turn out to be a tiny  fraction of what had been threatened.

The Observer reported it best – “This was supposed to have been a Day of Rage for students, trade unionists and public sector workers taking aim at ‘Nasty Nick’ and his ‘sell-out’ party.
Yet the turnout didn’t justify the disproportionate security operation and the event should have been billed as a Day of Being Really Quite Cross.”

I know how angry people are at the public sector cuts. I should know that, because my job involves………………. working every day with people who have suffered redundancy and can’t find work – I help them to set up businesses or go self-employed.

What I find hard to understand is why the Lib Dems are being blamed for the cuts.

If a Labour Government had been re-elected, they would have had to make massive public spending cuts too. 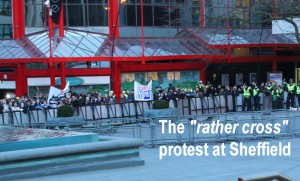 What’s happening in Northamptonshire is dreadful.

Because the Conservative County Council failed to plan for the future, up to 900 people will lose their jobs.

Compare that with the Lib Dem Borough Council, which has been cutting back and cost-cutting since they were elected in 2007, and as a result no front line borough council services have been cut and there will only be a handful of redundancies.

I am used to holding a placard rather than having one waved at me.

It seemed particularly ironic that the protests were in Sheffield, where a Lib Dem Council has kept its Sure Start Centre, kept its libraries open, kept its leisure centres open and only had to make a few people redundant.

Why weren’t the protestors at the doors of Manchester Labour Council which has closed Sure Start Centres, locked up the leisure centres and laid off more than 2,000 staff? Is it possible that this Labour Council is making cuts purely for political reasons?

Nick Clegg in his Conference speech got it right when he said “We’ve put down the placards and taken up the reins of power.”

I have voted and spoken in policy debates at Lib Dem Conferences since 1999. In those 12 years we have passed many policies that I knew were right and would make life better and fairer, but with little chance of them ever being implemented.

This is why I came into politics – to make a difference, and if being in power means that we have to face a few protests, it’s worth it!