A NUMBER of people have responded to the request in the February FOCUS newsletter asking whether the Youth Shelter behind the Hill Shop should be moved. 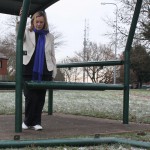 Everyone who has responded, including all the people who attended the Hills Residents meeting, agreed that the shelter should be moved.

The site that has been proposed is the new games area past the school.

This request has been passed to the Borough Council.

Obviously, at a time of cuts money is tight, but the FOCUS team will press for this work to be done as soon as possible.