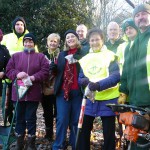 Now, some great news – funding for play equipment has been agreed. Both Hunsbury Hill Park and Shelfleys Park will see new equipment this year.

The money allocated by the developers of the West Lake estate will be used to improve the play equipment in Shelfleys Park.

Children, parents and grandparents will be delighted, particularly at a time of council cuts.

Fortunately the Lib Dem Borough Council has worked hard to save money over the last 4 years, so they can afford this work without cuts to frontline services or mass redundancies.