40 mph speed limit to be extended on Towcester Road

READERS may be aware of the unpopular decision by the Conservative-led County Council to site a waste re-cycling facility on the derelict old Blisworth sewage farm.

This is between the railway embankment of the West Coast Main Line and Young’s nursery between Milton Malsor and Blisworth.

Both Milton Malsor and Blisworth Parish Councils objected to this being sited so close to houses and existing development. Lib-Dem councillors on the county council and the borough council objected to this site as did a number of West Hunsbury residents on road safety and environmental grounds.

They also objected to the extra HGV traffic that would be generated through Milton and Hunsbury up Towcester Road to Mereway. The exit from the site to Towcester Road would be on a blind corner obstructed by the railway bridge. 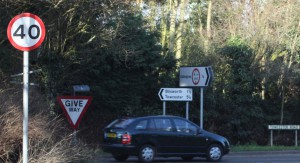 The 40mph limit will extend from Milton to Blisworth, currently 60mph

A condition of granting planning permission was a reduced speed limit on the Towcester Road, currently 60 mph at this point and from Blisworth area to the start of the existing 40mph limit at Milton Malsor.

The county council is now proposing an extension of the current 40mph limit along Towcester Road in Milton all the way to the start of the 30mph limit at Blisworth.

This goes some way to answering concerns about the hazard being caused as a result of the county council’s decision. However, it may not be enough to prevent further traffic accidents, possibly fatal ,which have plagued this road in the past. Adding more HGVs is frankly folly.

The speed limits must be in place first before the site is used.