Are you a rail commuter from West Hunsbury?

﻿THE COALITION Government has started its consultation on the HS2 line from London to Birmingham. 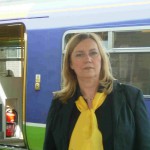 This will be the first link in bringing high speed trains to Manchester, Leeds and eventually Scotland.

Opponents argue that the £17bn scheme will be a waste of money and that updating the existing West Coast Main Line (WCML) would be a better investment. However, the (WCML) which runs from Euston to this part of the county has already been upgraded.

I don’t believe enough can be done to improve the WCML to avoid HS2. Moreover the WCML will soon be at maximum capacity. It has already been necessary to restrict cheap day returns to off-peak times to and from Euston and Northampton to avoid overcrowding. HS2 will release capacity on the WCML and enhance travel from Northampton

In general my views on HS2 correspond to those of the CPRE (Campaign to Protect Rural England), of which I am a member. In particular: