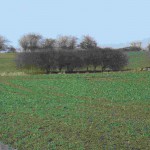 The Inspector of the Public Inquiry held in October 2010 published his report in December.

He has concluded that the site can remain in the County Council’s Minerals Local Plan as an allocated site for soft sand extraction.

The site is between Milton Malsor and Collingtree and lies on a triangular site between the south-west side of the M1, Collingtree Road and the railway line between Hunsbury and Roade. The site is opposite East Hunsbury over the motorway.

HGVs leaving the site will use a bridge over the railway line via Towcester Road joining the road at a point between Milton Maslor village and the M1. They will then travel north along Towcester Road towards the roundabout at Mereway. The Inspector didn’t think that a few extra trucks would matter!

This is the recommended route, however residents of Milton Malsor and Collingtree know from experience that Northamptonshire County Council are incapable of enforcing this route and it will be ignored by vehicles from outside contractors who will simply choose the shortest route which may be through Blisworth, Ladybridge Drive or Rowtree Road.

More HGVs on residential roads – thanks to the Conservative-run county council. Lib-Dem run Northampton Borough Council opposed the site as did Lib-Dem opposition councillors on the county council.

The local Chronicle & Echo reported the story as ‘Final bid to block quarry plan near villages’.