The facility was strongly opposed by Blisworth and Milton Malsor Parish Councils, as well as residents in West Hunsbury.

The 50,000 tonnes of rubbish is going to be shipped in and then out by HGVs. The approved route for all traffic  will be via Towcester Road through Milton Maslor and Hunsbury and up to the Mereway roundabout. 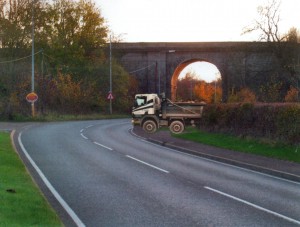 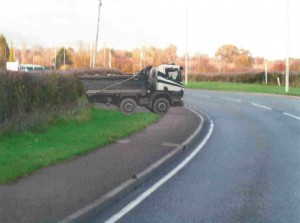 “It’s a fair bet that a number of these trucks are going to sneak past the ineffective ‘Local traffic Only’ signs at the entrance to Ladybridge Drive and Hunsbury Hill Road in West Hunsbury.

This section of road from Tiffield to Mereway was bypassed in the early 1990s as it was unsuitable for HGVs. Now the Conservative-led County Council think they can just go ahead and dump more HGVs back on it” says local campaigner Jill Hope.

The story gets even worse. The exit for the facility is on a blind bend where the speed limit is currently 60mph.

These computer simulations shows what the exit would look like for a car driver approaching with a heavy vehicle about to exit from the site.

A proposal to reduce the speed limit to 40mph goes some way to mitigate the possible seriousness of a collision, but can’t alter the fact that it’s on a blind bend.