It’s the LibDems wot get the blame! 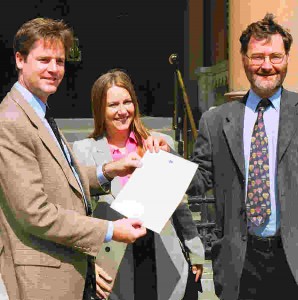 “What do you think of the Coalition Government?”

“I’ve been asking people of all political persuasions in West Hunsbury this question” says Jill Hope.

Much to her surprise, the general response is that people like it. Many thought it wouldn’t last. Many thought that the LibDems would be swallowed up, but now acknowledge that this is not the case. Many Lib Dem policies have already been implemented:

Now who gets the blame for the spending cuts? The last Labour Government or the LibDems? All those years when Vince Cable was protesting vigorously about excess credit, no one believed him. Commentators say “Why didn’t you warn us?”.

We DID buddy, WE DID! 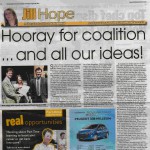 The LibDems don’t mind sharing power provided our ideas to improve lives and cut the gap between rich and poor are implemented. Anyone who has known Nick Clegg, the Deputy Prime Minister will know that he is an honourable man  who cares passionately about life chances and equality of opportunity.